Oakenden Bike Polo: Where Cycling and Polo Combine into One Fun Sport

Many a good idea is made in the pub, and the idea to play polo but on bicycles instead of horses is one such idea. The advantages of using bicycles instead of horses were obvious from the get-go - low cost, not much equipment is needed, and anyone can play. You might think that bike polo is a relatively new concept, but it has been around since 1891 and was invented by an Irishman by the name of Richard Mecredy. He also just so happened to be an Irish cycling champion as well, so he knew he was around a bicycle. 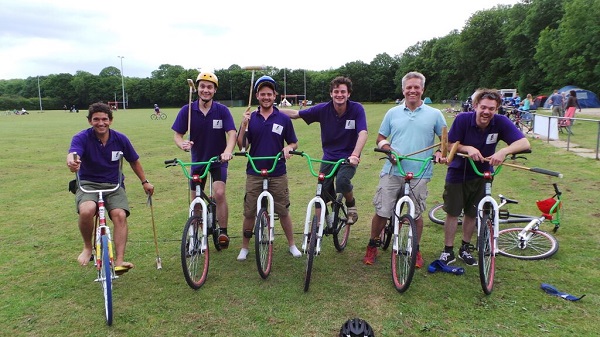 Welcome to the Oakenden Pedallers

Here at Oakenden Pedallers we welcome players and spectators from all different walks of life. Whether you are completely new to bike polo or have been playing for quite some time and consider yourself to be pretty good at the sport, you are more than welcome to join us at Oakenden Bike Polo. We are always on the lookout for new members to help us expand, and we do not have a long waiting list of people wanting to join, so we are always happy to see any new face.

If you have never played bike polo before but have seen it being played and would like to give it a go yourself, come along to our club and sign up for an introductory coaching session where our qualified and friendly coaches will teach you everything you need to know about this entertaining sport.

We are aware that youths are our future, which is why we have made sure that we cater for youngsters as well. We have a number of youth teams for the following age groups:

We have a number of coaches who have been specifically trained to coach youngsters, so if you sign your children up with us, you can guarantee that they will be getting some quality bike polo training. Additionally, we enter our youth teams into a variety of bike polo competitions across the country, so your little ones can get a taste of competitive action.

A History of Bike Polo

As we mentioned above in the introduction, bike polo came into being in 1891. The sport grew steadily in popularity, and it was even included at the 1908 Olympic in London - Ireland beat Germany 3-1 in the final to claim the gold medal. This exposure at one of the world’s biggest sporting events led to more exposure and bike polo flourished. It reached its peak in the 1940s when there were more than 170 teams in England, and numerous clubs across the world.

However, since the War there has been less interest in this sport, but there are still a number of clubs from England, Ireland, France, Scotland, USA, India, and Canada that compete in competitive tournaments. In 2007, a European Cup tournament was created to enable clubs playing in Europe to play against each other using common rules.

This tournament has been dominated by Rouen and Le Havre, but it is safe to say that the Irish and British teams are shortening the gap. Oakenden Bike Polo have competed in this cup on a number of occasions and have a best finish of third. We are also the hosts of the British stage of the European Cup every year.

A Look at the History of the Club

Oakenden Pedallers, now more commonly known as Oakenden Bike Polo, came into being in 2004. Martin Adamson is the founder of this club, and he can claim to be one of our best ever players. He was traveling around France in the summer of 2003, and he came across this sports club where people were playing what seemed to be polo on bicycles. He was intrigued by what he saw, so he went down and spoke to some of the players. Their English was lacking a bit, but Adamson knew decent enough French to converse with them in their own language.

He spoke to them for well over an hour getting to know the ins and outs of the sport, and they also let him try it out to see if he liked it. By the time he was leaving, he had already decided that he was going to try and set up his own bike polo club when he got back to the United Kingdom.

When he returned to Britain at the end of summer, he set about setting up Oakenden Bike Polo and it opened its doors to the public in the spring of 2004. The rest, as they like to say, is history. We are actually quite well known nowadays among cycling and polo enthusiasts and if you had already heard of us before coming across this site, there is a good chance that you saw us in Cycling Planet, one of the most popular cycling-themed magazines.

Bicycle Sports Club: The Rules of This Sport

We understand that there are people who will visit this page that do not know much about this sport, so we thought that we would now take the time to explain the basic rules of this sport. If you are thinking about coming down to the club to give bike polo a go, we recommend that you give this section a good read as it is always helpful to have some sort of idea as to how a sport is played before you go ahead and give it a go.

A game of bike polo is made up of two teams that have five players each - a goalkeeper and four outfield players. Each match consists of two periods (chukkas) that are 15 minutes each or four periods that are ten minutes each. The aim of the game is to score more goals than your opponents.

At the start of each game and each period, a sprint start takes place with each team nominating a sprinter. The two sprinters start on the left side of their goal and they sprint towards the ball in the middle of the pitch to get possession. In order for players to touch the ball or tackle an opponent, the players must hold the mallet in their right hand, handlebar in their left, and players cannot touch the ground with any body parts.

Players are allowed to:

• Juggle the ball on their mallet.

• Pass the ball or score using the wheels of the bicycle.

• Hit the ball with their head or any other body part, but cannot intentionally use their feet unless they are the keeper.

Players are not allowed to:

• Shoulder or jostle their opponents.

• Block a player that does not have possession of the ball.

• Play the ball if they are touching the ground with a foot.

• Play the ball without having their left hand on the handlebar - apart from the keeper.

• Stick their mallet in the wheel or into the bike of an opponent.

• Throw their mallet or drop their bike in order to impede an opponent.

If you enjoy the sessions and want to become a member, then we have listed the membership fees for 2021. Obviously, these are for the full year, so if you decide to sign up now, we will work out the price for what is left in the year. On the 1st of January 2022, if you like, you will have the option of renewing your membership for the whole year.

Bike polo is a fast-paced sport, and you will work up an appetite and a thirst in next to no time, especially during a hot day. Yes, we do have hot days in Kent, believe it or not. Therefore, we have built a great clubhouse that has been voted as one of the best bike polo clubhouses in the country.

Our clubhouse has been furnished with top-quality furniture so that once you have finished an intense game of bike polo, you and your fellow players can sit relax in comfort and quench your thirst and satiate your hunger. We offer a variety of tasty food and cater for both vegans and vegetarians. When it comes to the bar, we have a variety of non-alcoholic and alcoholic beverages available.

We also know that the majority of our members are sports enthusiasts, meaning they follow other sports other than bike polo. This is why we have got a couple of HD televisions and a subscription for Sky Sports. Whenever there is a big sporting event on, you can watch it with your friends in a great atmosphere.

Obviously, you will get nice and sweaty when playing bike polo, and if you fall off your bike you will also get dirty as well. You will obviously not want to then go into our clubhouse all sweaty and dirty, which is why we have equipped our changing rooms with quality showers. All the showers are petitioned, which means that you can clean yourself in private. We also have plenty of lockers, so you can keep all your valuables secure when you are out on the field enjoying some bike polo.